(My daughter is my favorite author. She is nine years old and has more talent in her tiny little fingers that fly over the keyboard, trying to keep up with the voice in her head, than I do in all my writerly brain and years of experience. She wrote this realistic fiction short story for a school project. The assignment was to write an essay, poem, or short story about “Which has a greater impact on society: Love or Hate?” While most of her classmates wrote essays, she came up with this. This is untouched by me–not the words, not the grammar, not the punctuation or pacing or content. She. is. nine. If you are touched by her words, she’d be absolutely thrilled to read a comment from you. Enjoy.) 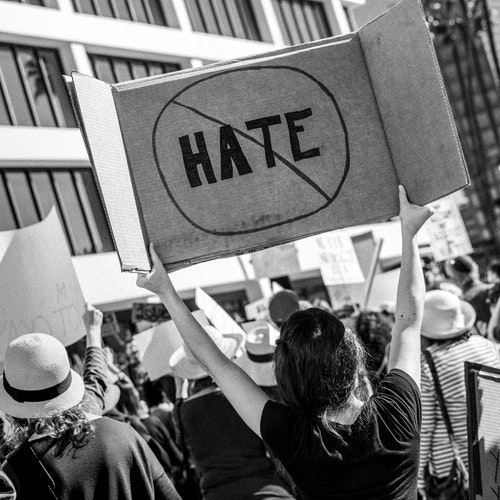 Momma says love has a bigger impact on society, and nobody cares about hate so it might as well have a nonexistent impact, but I don’t know about that. Because if love had a bigger impact, maybe my great-uncle Joe would be here today.

I’m just a kid, so I can’t pretend to be some big expert on worldwide societal change and impact. But I do know that Uncle Joe only stayed a soldier way past retirement age because he was afraid people might hate him if he quit, and the president hated the leader of France, which caused a war. And Uncle Joe died in the war.

I don’t want to cry. Uncle Joe was my friend, and so when I grow up, I’m going to be in the army too. To honor him. And brave, strong soldiers like Uncle Joe–like me–don’t cry.

Well, that’s what I tell myself. But it doesn’t stop me from blinking hard, fast, trying to keep back the tears. And then they’re really falling, if silently, and my chest is shaking, and I’m full of pain. I don’t want to be crying, I don’t want to be feeling this pain, but I can’t help it. Strong soldiers don’t cry, at least I think they don’t–I never ever saw Uncle Joe cry–but here I am, crying and crying and crying like the world is burning down around me. If I could decide, and believe me, I wish I could, I would be standing here, stoic and strong. Comforting those around me and mourning in peace. But I’m not. I’m standing here and I’m crying. It’s a little embarrassing.

Momma notices. She leans over and whispers, “Let it out, Ellie, you’ll feel so much better once you get it out of your system.”

So I do. Even though I’m not proud of it, I stop trying to hold back the rushing tears. I just cry.

And, when I’m done having my good long cry, I think a little bit about what I was thinking earlier, back when I was bitter and stoic and not-crying (Momma was right, now that I have it out of my system I’m feeling much better.)

Hate has other impacts, too. Kind actions, sure, people are happy about and they say it “makes their day,” but I know that I–and Momma, and Daddy, and my brothers Will and Mason–we all grab a mean word, a particularly nasty one–a hateful word–in our web of memories and hardly ever let it go. We carry hateful words with us for the rest of our lives, until we’re too old and frail to remember much of anything. And, if someone does something rude or mean, the person begins building a wall of hatred. And then, the second person does something mean to them. And the wall of hatred just keeps growing–complete with the stabilizer of hurt feelings and the mold of grudges–until it’s too high for either person to jump or even climb over. And then these two people who could’ve been good friends each think the other has to apologize to them. And then this potential friendship is ruined, and even though the wall of hatred may crumble a little here, break down a bit there, essentially erode a little over time, it will never be low enough for the people to get over it. And they hate each other for the rest of their lives, until, like I said, they’re too old and frail to remember anything, and maybe they’ll even hate each other then, without really even knowing why.

And now, hatred has ended my Uncle Joe’s life. No, it’s not just Uncle Joe–many, many soldiers lost their lives in that war. Today, many families around the country–and all the way in France, because soldiers died on the other side, too–grieve and mourn and celebrate for their family members. I remind myself that I’m very lucky. My dad and older cousin Howard both went to fight in that war with Uncle Joe, and they made it back to me and Momma and Will and Mason and Aunt Kari and Uncle Noah. And for one tiny moment, I’m just purely happy that Daddy and Howard made it back to us, even though Uncle Joe didn’t. But then I come crashing back down to earth, to the sad reality. Uncle Joe is gone. For the first time, that truly sinks in. He’s gone. I’ll never see him again.

My twelfth birthday is in a month, and he’ll never get to meet twelve-year-old me. He joked that as soon as I get my driver’s license, I’ll take him on rides, but I’ll never get to do that. He used to boast that when I’m all grown up–Major Ellie Hernandez-Thompson, a famous commander who led the U.S. Army to victory many times–he’ll be able to tell people that he remembers when I was smaller than the tubs of ice cream we share on Sundays, not caring if we stain our best church clothes, but he’ll never be able to do that, and we’ll never eat ice cream like that together again, either. I promised him he could be a senior groomsman in my wedding, when I’m in my twenties, freshly out of university college, but he won’t even be able to watch me fall in love, let alone be in my wedding. He’ll never sit at the table again, his face buried in the newspaper, shaking his head and saying some not-so-nice things about Trump. He will only ever meet eleven-year-old me. I’m eleven years old, and that’s all Uncle Joe ever got to see of me. He didn’t get to see Major Ellie Hernandez-Thompson, he didn’t get to meet Ellie the married woman, and he’ll never talk to Ellie the mom. He won’t even meet Ellie the teenager. He’ll only know Ellie the eleven-year-old. And I hate that.

And suddenly I’m filled with hate. I hate that he’ll never be able to meet any version of me older than eleven. I hate the man that shot him. I hate whoever’s that man’s boss even more. I hate that he insisted on going to war even though he’s well past retirement age. I hate that everyone’s just standing here instead of throwing the memorial party a man like him and a life like his deserves. I hate that Dad and my cousin Howard made it back and Uncle Joe didn’t. But then all the hate drains out of me, and I fall to the ground with an empty thump. I still resent the fact that Uncle Joe didn’t make it home. But mostly I’m thinking that Uncle Joe–and hundreds of others–lost their lives because of hate. And hate is a stupid thing to die because of. Sickness and old age and car crashes and stuff like that–those are all appropriate things to die of. But Uncle Joe and tons of others didn’t die the normal way, the way they should’ve–they died in a war. Because of hate. And that’s not only a stupid way to die, it’s unfair. And I know life isn’t fair, but this is unfair to the point that it’s wrong.

Today, as we mourn Uncle Joe and all the others that lost their lives in the French-American War, my bouncy, resilient red hair is a little duller, maybe copper, my bright blue-green eyes dimmed to a shade that’s maybe even just hazel. The greens on my army jacket–the one Uncle Joe gave me for my ninth birthday–are a little murkier, maybe more the color of pond scum or pea broth than appropriate camouflage. The colors of my world are dimmer, honoring the soldiers that lost their lives to hate.

That last thought still lingering in my mind, I curl up into a little ball and have myself another good cry.

11 thoughts on “Hate and Uncle Joe”