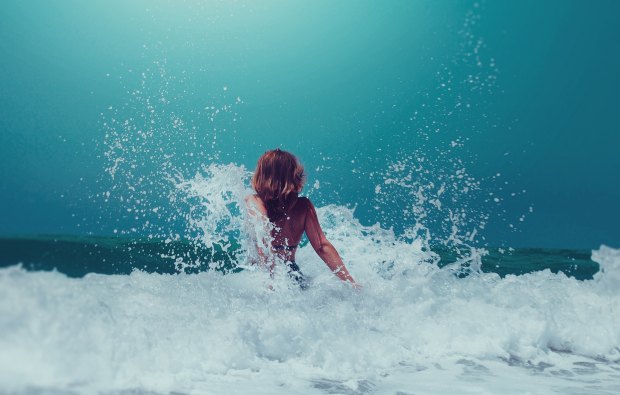 My daughter has always been pretty damn good at dealing with the trials and tribulations of life.

There’s a story, passed into family lore, about her at the age of two. Her younger brother, still a baby, crawling, infatuated with his newfound freedom of movement, was pitching an epic fit while I tried to wrestle him into his restrictive car seat straps.

“Why is Sammy crying? Is he okay?” my daughter, buckled in and waiting, asked worriedly.

“Oh, baby, he’s just upset that he has to wear his seat belt,” I told her, wrestling with the writhing banshee in front of me.

My son’s wails filled the car, and my daughter, hands thrown protectively over her own ears, yelled, “Well, I have to wear a seat belt, too, Sammy, and I’m dealing with it! Do you hear me, Sammy?! I’M DEALING WITH IT!”

She walked through her early childhood years with a confidence and maturity that was unusual for a child so young. Knowing this self-assurance would serve her well in life, we made a concerted effort throughout her childhood to celebrate her swagger, maximize her moxie, and honor her chutzpah.

Thinking we could cement her self-confidence in an unshakable self-love, we did everything we could to teach her to honor and take pride in herself. We celebrated her creativity and her leadership skills, her work ethic and her problem solving, her beauty and her strength. We taught her to value differences in others, hoping that empathy would become an all-encompassing embrace that would include her own unique self.

There’s a bedtime song we sing to our kids that my husband made up, called the “I love you” song. We sing and use sign language to spell out “I love you” and our kids’ names over and over, and then we end with “And I hope you love you, too!” at which point they cheerfully chirp, “Yes, I do!”

Years we have sung our love to them. Years they have smiled and gazed at us while happily avowing that they, too, love themselves. Surely we were teaching them a self-love so deep, no tectonic shift could touch it.

As the years passed, though, my daughter’s innate moxie was chipped away, bit by bit. She qualified for two of the gifted programs at school, but not all three. Chip. She is in six different activities at any given time but doesn’t do music lessons like her friends. Chip. She isn’t as fast as her brother—chip—she isn’t a child Broadway star—chip—she isn’t as tall as the rest of her class—chip.

Comparison—that infamous thief of joy—is also the tiny, daily pin pricks to the balloon of self-confidence. Her swagger got smaller and smaller, sputtering, like an engine on fumes.

Last fall, my daughter, now nine, had a bumpy day at school. Learning to navigate the rise and fall of friendships is a tough skill at any age. We’d talked it through, her asking all the hard questions, me struggling to make hard answers seem easy. She was snuggled into bed, tucked in with her loveys and her books, and I picked the “I love you” song as one last reminder that no matter how hard the day has been, she is always, always loved.

We reached the end, where I sing “and I hope you love you, too,” and she was quiet a beat too long before habit forced words from her lips, words that I was hearing for the first time. “I don’t know. I guess I do. Sometimes.”

I felt my own feet rising, rising, rising, losing touch with the ground as a wave of a new kind of parenting grief lifted me away from the confident connection I had felt for so long.

My girl—my brilliant, beautiful, kind, sparkling, gifted, one-of-a-kind girl—was falling out of love with herself, right then, in that day, in that moment, in front of my eyes.

Self-doubt became her frequent companion, the daemon that sat on her shoulder and whispered in her ear. She came to hate things that caught her off guard, things that she wasn’t prepared for, things that would challenge her sense of competence and remind her that she wasn’t in control. (You know. Things like life.)

And I foundered alongside her. All my efforts to give her enough self-love and confidence that she could avoid doubt and fear seemed so laughable. So weak.

We spent winter break this year in Florida, tagging along on my husband’s work trip. We spent our last evening in Palm Beach, reveling in the sunshine and warm ocean water we won’t see for months yet in snowy New Hampshire. My daughter is a competent swimmer, years spent in lakes and pools and on swim team. But every time a wave would come, she would panic, clinging to my arm, begging for help.

The waves would lift her feet from the ground, taking away her solidity, her assurance, and she would lose herself in that loss of control.

I felt desperate in that moment, in that ocean, desperate for her to find that swagger, that moxie, that she’d worn like a skin for so many years.

“You can SWIM, Ali!” I hollered at her. She kicked her feet frantically, holding onto my hand, eyes staring at mine, mind whirring. “Yes, waves come. They pick you up and lift you off the bottom and you can’t see over them. You don’t know what’s on the other side. So you know what you do?”

“You DEAL WITH IT. Maybe there is another wave just over this one that won’t give you enough time to touch the ground and jump again. Maybe there’s not. Maybe you’ll get salt water in your eyes and mouth. Maybe you’ll go underwater when you aren’t ready. But whatever happens, you can DEAL WITH IT. You spit out the water, you take a breath, the stinging doesn’t last forever. You swim when you have to. You rest when you can. You can handle whatever you need to handle.”

She let go of my hand just enough to swim alongside me.

A wave appeared. “Mom!” she yelled, and I could feel it, I could feel her struggle between moxie and fear, between confidence and doubt.

She jumped up and over the wave, and just on the backside, hidden behind the first, was another wave, a bigger wave, immediately, because of course nothing is easy when you’re trying to teach your kid a lesson.

She kicked furiously over the second wave, screaming into the sunset, “I’m dealing with it! I’m dealing with it!” The look of determination and pride on her face was a time machine for me, taking me back to the little girl who knew she could conquer the world.

She spent the rest of the evening standing up to the ocean, seeing a wave coming and yelling “Oh, I see you wave! You think you’re big? I’m going to deal with you! I’m dealing with you! Ha ha ha, I dealt with you like a boss!” and jumping and splashing and swimming and dancing with the salt air and the orange light and the rise and fall of life.

And in those swells, those hollers, that water, that night, I felt my own feet finally return to earth.

I realized that I had tried to give my daughter a way to bypass my own struggles, as every parent does, without realizing that doubt and fear are just as integral a part of the human experience as confidence and love.

Life isn’t about being so completely confident that you sidestep doubt. We can’t avoid the waves of life, the scary, can’t-see-past-them moments that pick us up and take away our solid ground.

In fact, we need those waves, those inevitable moments of challenge and loss of control, to teach us that no matter what comes, we can deal with it. Those moments are when we realize the power of our own legs to kick through, the ability of our own spirit to respond to whatever happens and to eventually, always, take that next pure breath on the other side.

Those moments when we seem most unsure are, paradoxically, the moments that finally instill in us a sense of competence and confidence. Swagger, it turns out, is earned not learned.